The Jazzy Vegetarian Vegan Cafe is a 100% Vegan Cafe (no animal products what so ever!) housed within Sanctuary Brewing, in downtown Hendersonville. 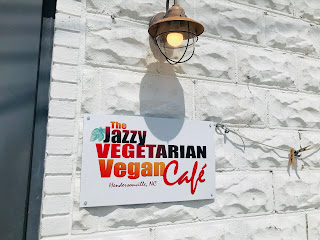 There is street parking off First Ave. If you can’t find a spot at first - circle around the block and you’re bound to find something.

The inside is spacious and charming, with edison bulbs everywhere for soft lighting. Each table is adorned with fresh flowers, and there’s adorbs hanging murals with cows and other cute animals painted on them. They’ve got small tables for solo/double dining, or a large table for communal dining. 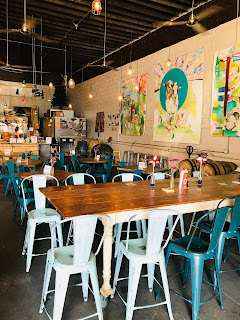 There are several Tv’s at Jazzy Vegan - as well as on the Sanctuary Brewing side, that had football games on when I went. I’m not sure what teams were playing; but I do know one team on one Tv had brown helmets, and another team on the other Tv had blue helmets - possibly. So, it’s a great place to catch the game. 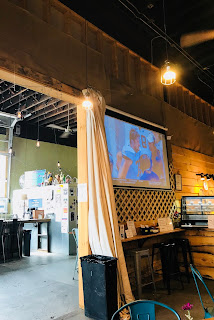 I try to get into watching football, but I grew up in a town that didn’t allow it, in what appeared to be (in retrospect) somewhat of an Amish Cult. So now, every time I try to watch a game - my eyes always glaze over and someone asks if I’m “ok”. Therefore, I usually have lengthy conversations with my dog about up and coming local artists, instead. 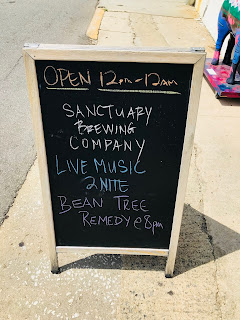 To eat; there is quite a large selection of vegan sandwiches, salads, pizza and desserts.

Take a peek at the menu online before you go or look at one up at the counter when you get there- and order with the nice gentleman at the corner of the counter. He’ll give you a order number thing that will vibrate and light up when your order is ready- then simply go up to the counter and grab your meal. 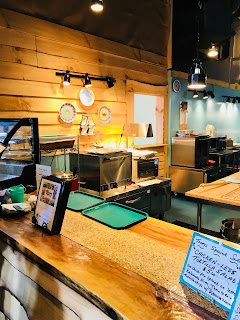 I ordered a Vegan Chickenless Sandwich, Small Greek Salad and a Juice.

Everything came organized on a cute little tray, which made it easy to carry back to my table!

The salad was super fresh and came with nomz vegan feta cheese crumbles. It was loaded with peppers, olives, tomatoes, cucumbers, and other yummy fresh stuff. 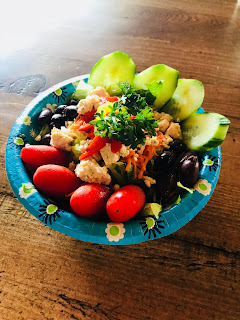 The sandwich was super delish and the sauce it was topped with was particularly tasty. It also came with a large side of chips! 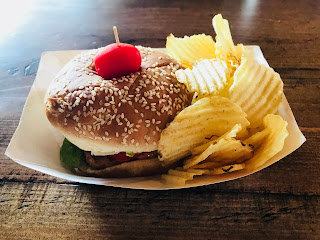 So - I accidentally dipped my little side of tortilla chips in what was intended to be the salad dressing, and it was actually quite a yummy combo. Just sayin. 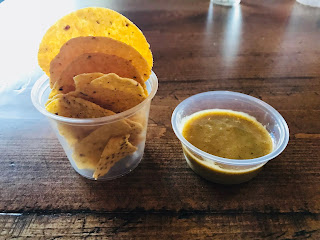 I’m not sure if Jazzy Vegan itself is pet friendly (the “health department” thinks it’s “not ok to have your dog indoors where food is being prepared”, or at least that’s what the manager at Ingles tells me every Sunday when I try to bring my bulldog mix Mrs. Buttersworth* grocery shopping with me), but I know Sanctuary Brewing is- so def. bring the puppers along when you go to try some of their very yummy beers! 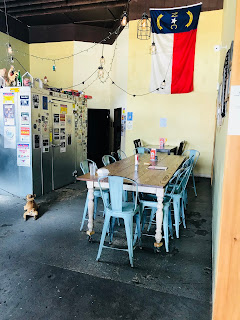 The thing that I love best about Sanctuary Brewing (besides their amaze food and drinks) is that they are huge on animal welfare (check out their rescue farm on IG- it is legit the sweetest-kindest-most adorbs thing you’ll ever see), and supporting the local community with their events like “Give Forward” where they give out free haircuts, resume building help, meals, etc. to the community.

Tip; Make sure you check their hours on the website before you go- Sanctuary Brewing is open seven days (yay!!), but Jazzy Vegan has select days and hours.

*Name has been changed to protect their anonymity 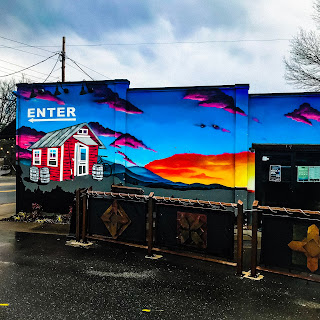