For Halloween this year we decided to get our fright on a little early at the (very haunted) ‘Thomas House Hotel’ in Red Boiling Springs, Tennessee.

Red Boiling Springs is about four hours North West of Asheville. The town was a very popular spot back in the late 1800’s as a mineral spa destination during the hey dey of “mineral cures“ - modeled after the highly successful resort town of ‘Saratoga Springs’ NY.

“Taking the Waters” (as the old fashioned people liked to call it) was rumored to have cured various ailments from Malaria to “weakness of women”. Others speculate that these “healing resorts” were in fact just a great excuse for the wealthy to enjoy a fun filled vacation in the mountains jam packed with drinking, gambling, prostitution, and lounging around in a bath all day long.

The Thomas House Hotel itself was originally built as the “Cloyd Hotel” in 1890. After a fire burnt it to the ground in 1924, it was rebuilt in 1927. Many spirts are said to haunt the town and hotel; lingering from tragic floods, multiple fires, and freak accidents. 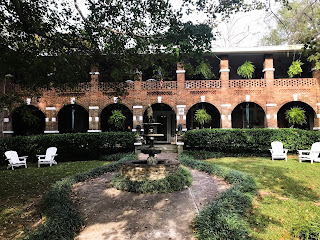 So anyway - since Knoxville is about two hours from the hotel and right on the way, we decided to stay there Friday night and do some exploring Saturday during the day before we headed to the haunt.

After checking into our hotel “Tru” by Hilton we headed to ‘Market Square’ in downtown Knoxville to enjoy a dinner at “Myrtles Chicken and Beer”. Our meal was super delish and filled with collard greens & good drinks. Besides beer, they also have cocktails and mocktails. 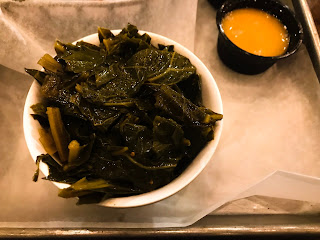 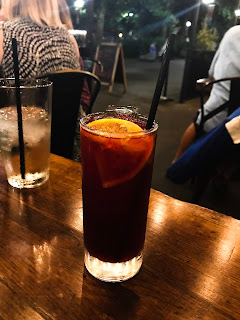 Ok - so I just have to say; if you’re ever in Knoxville you should definitely stay at “Tru”. Not only was it super affordable (so you don’t have to sell the soul of your first born child to rent a room for the evening), it was (also) only about 10 minute minutes from downtown Knoxville. The room included a yummy breakfast, and had some pretty neat perks like USB ports all over the room, recycled paper plates, and no single use plastics in the room. 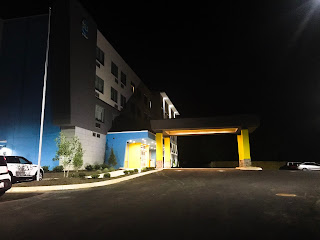 Since we were enjoying a spooky weekend; Saturday am we stopped by a historic cemetery in DT Knoxville, that dates back to the late 1700’s. It’s right off of State Street, a stones throw from ‘Mast General Store’. 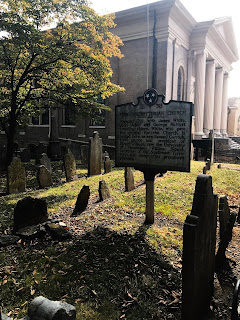 Mast is a must do in TN. Make sure to raid their candy bin and stock up on mini Cow Tails & Root Beer Barrels for the rest of your road trip. Not only is the candy super scrumptious; it can also used as an offering to lure in ghosts once you get to the Thomas House. 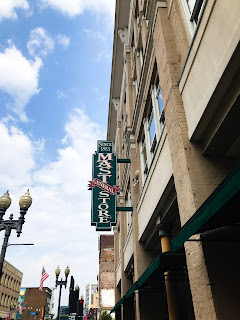 The check in time for the Ghost Hunt weekend was at 4pm, so after exploring Knoxville we headed on over to Red Boiling Springs to the Hotel to get settled in, take a short nap, and relax out on the front porch for a few before the evening festivities - giving us time to observe the very still air; which added to the (already) spooky ambiance. 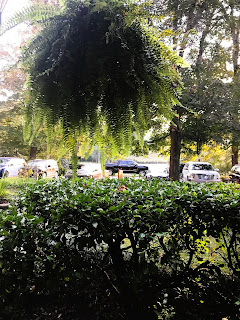 Dinner started at 7. We got to nosh while enjoying a presentation by Chad Morin of Ghost Hunt Weekends, as well as watch an episode of ‘Ghost Hunters’ that had previously been filmed there, followed by some tips by Chad on how to fully enjoy the ghost hunting experience. 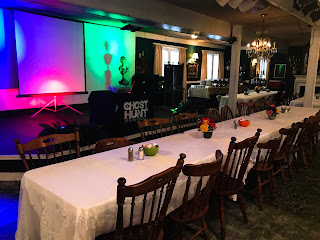 After dinner, all the lights in the hotel were turned off & we broke into smaller groups and headed out to some particularly haunted spots on the property. First was the ‘Seance Room’ followed by the ‘Church’. It was nearing 11pm and there were no hauntings in sight - but; I did hear a cow moo in a nearby pasture. 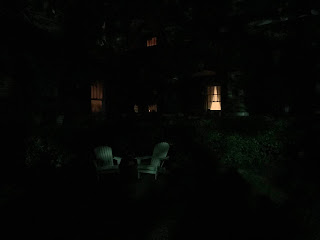 Our next stop was the “White Hallway” for more ghost hunting. This particular wing of the home is said to be haunted by the spirit of some man who’s (dead) body had been kept on ice for three days in one of the guest rooms way back in the day. Yet again; no hauntings. I was, however, able to snag a seat on a pretty comfy couch and take a quick nap without anyone noticing (since it was so dark). 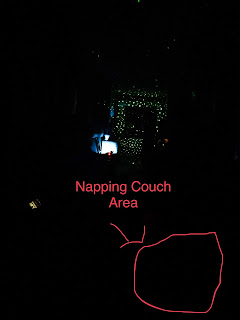 Lastly - we headed to the “Green Hallway” (the wing where our room was located) to finish off the group portion of the ghost hunting evening. Immediately; the bf noticed that the lights in our room (that he had turned off) were back on.

During the dinner presentation we had learned that Room #41 in particular (our room) had had a history of some particularly odd hauntings. We were *finally* starting to get spooked. 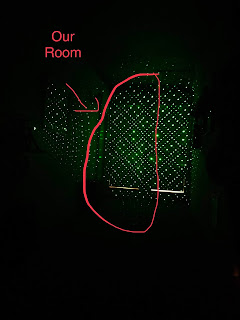 After offering the ghosts a delicious piece of hard candy from Mast General Store, everyone in our group heard an abnormal gurgling sound coming from *my* area. Once I explained that it wasn’t me digesting my oversized dinner - the lights on the ghost hunting equipment thing started to flash and we were able to pick up some audible words such as “Fire”, “Ed”, and “Sour Lemon Drops”. 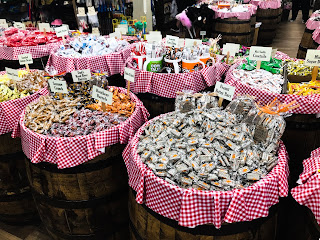 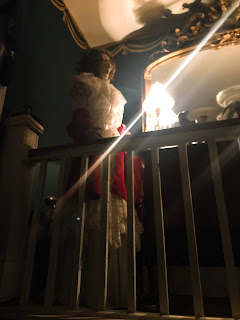 When the clock struck midnight we re -grouped back in the dining room for midnight snacks, coffee & another presentation that provided more details about the ‘Thomas House Vortex’ and the haunting connection with spooks & granite (The Hotel was built on Granite. Eek!).

Truth be told - The S.O. and I actually just grabbed some coffee to-go, skipped the second presentation, and headed back down to the church to get a head start on the ghost hunting and enjoy some alone time.

The two of us sat in the darkness of the old Church for quite some time with no visible activity - and began to think that maybe the entire ghost hunt had been an elaborate ruse fueled by the assistance of technology. 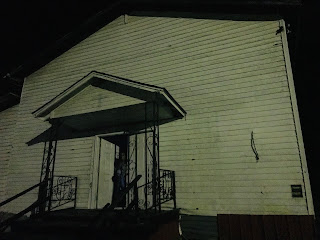 Post presentation  - we met up with some other guests that said they were headed out to do some more ghost hunting - armed with a flashlight and energy detector. 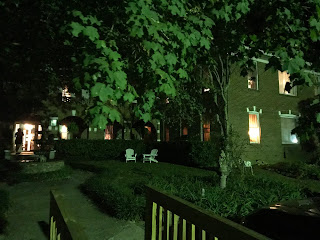 Our first stop on the “after hours” haunt was back to the church.

Apparently, the pastor ghost that haunts the Parish doesn’t like women (yes - only women) to sit up on his pulpit.

Naturally, I was peer pressured to go sit up on the pulpit and scoffingly commune with the sexist spirit. 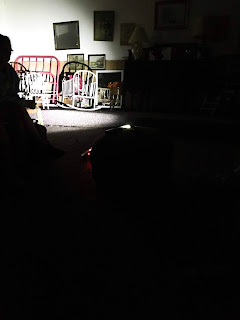 Immediately after sitting on the pulpit I felt the hair on the back of my head stand up, and then the lady sitting in front of me whispered “I don’t mean to scare you, but he’s behind us”.

That’s when the excitement began... The flashlight immediately began to flash on & off, the lights on the energy detector went haywire and ghastly greenish blue orbs began to appear and disappear.

Other members in our group claimed to see a bright flash of lights by the road outside that appeared to be a vision reminiscent of a large fire. 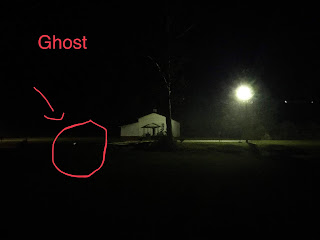 Now that we were thoroughly terrified - we headed across the field and back to the Thomas House itself where we did some more exploring in the dark, checking out the gift shop filled with antiques - where we stumbled upon a super adorable thimble to add to my thimble collection. 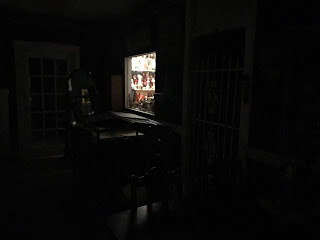 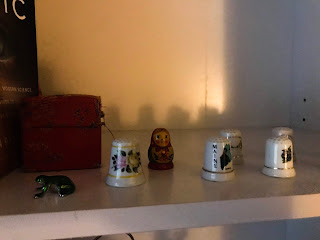 At that point in time it was nearing 3:30 am and I was getting pretty sleepy - but; being that we don’t often get to wander around a haunted hotel in the middle of the bewitching hour; we made one last stop to the ‘Seance Room’ and met up with the last of the ghost hunting guests that had braved to stay up so late.

The five of us were able to commune with another (way cooler & more benevolent) spirit and WW1 soldier - using dousing rods.

There were definitely some *very* mysterious things that happened during the channeling -  such as flashlights repeatedly falling and pointing at whomever was currently holding the dousing rods - with no wind to blow them over,  and other strange occurrences; such as haphazardly stumbling upon a black & white portrait of the spirit we were communicating with, hanging on the wall - mid seance. 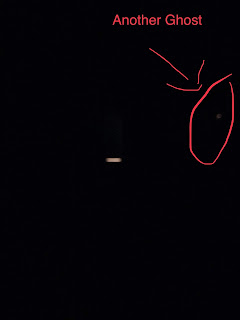 On the way back to NC we stopped by Ijams Nature Center in Knoxville to enjoy some swimming in the Quarry and wash the ghosts off. Ijams Nature Center is the perfect place to swing by and get grounded on your way back from Red Boiling Springs. Ijams not only has a beautiful rock quarry where you can kayak or swim they also have some great (free) hiking.

So this is not actually a picture of me on the edge of the lake, it’s actually a Golden Retriever. 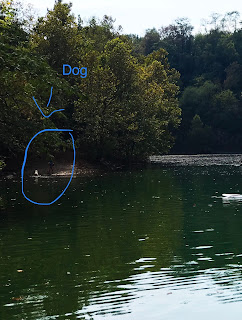