The Poe House is a bar and restaurant in downtown Hendersonville, featuring craft cocktails and yummy food.

I had family in town for the Holidays, so we decided to check out their New Years Eve celebration. 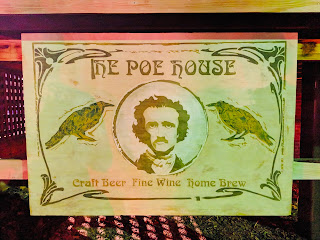 And yes - Phantoms have families. It’s kind of complicated - but pretty much I’ve been using their sisters body as a host for approximately a quarter of the last century.

The new family and I had a few rough patches (initially), when I first possessed their kinship; and would stay up all hours of the night wailing, eating all of their cereal, and sometimes standing outside their windows and peering in while holding a large kitchen knife - but eventually they were all ok with it when they realized I would most likely never leave.

Anyway - Since The Poe House is right on 1st Avenue, parking can kind of be in high demand. If you can’t find a spot right off 1st Ave. or on Main Street - I recommend parking over on Church and taking a short stroll up. 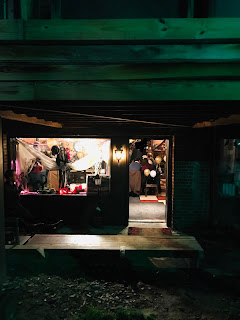 When I suggested to the group that we go to The “Poe House” for cocktails and dessert - my brother (that was visiting from Utah), kept thinking that I said we should go to the “Poor House”.

He was pleasantly surprised when we arrived arrived at the restaurant and realized that we were going to the “Poe House”, not the “Poor House” - so an evening of an Victorian Era Penal Labor Regiment was not in order, but rather fancy drinks and yummy desserts. 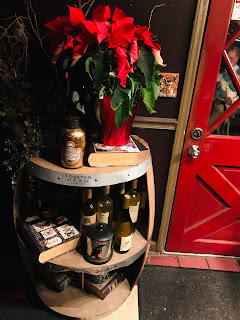 My brothers (very lovely) girlfriend and I were pretty impressed with the overall ambiance when we’re arrived, as well.

The interior of the Poe House, had a dark and mysterious, captivating - kind of feel to it... with wooden burgundy and brick walls, black floors, illuminated candles, antique books on the shelves - and ravens galore. 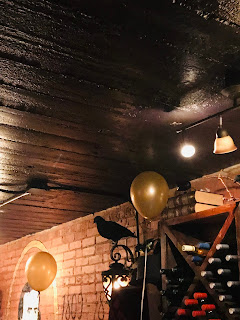 We didn’t have a reservation, but luckily there was one table for two left - so we made my brother go wait in the car.

Kidding - the nice hostess brought us over a third chair so we could all sit together in the front room and listen to the live band, under the portrait of Poe Himself. 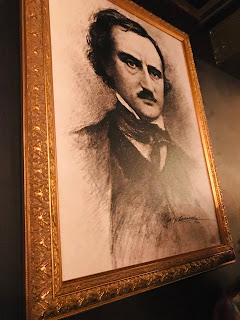 Waiting on our table were *very adorable* black and silver New Years themed tiaras and kazoos. 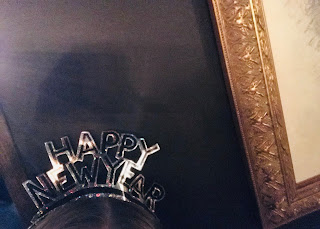 Plus, The Poe House itself was also decked out with lots of balloons and festive NYE style decorations. 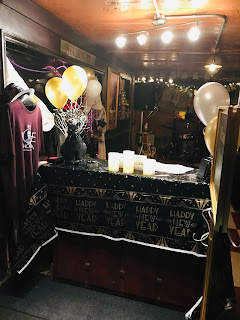 The drink menu was impressive with a wide variety of sophisticated cocktails, a broad selection of wine by the bottle or glass, and sake.

To eat there was a large selection of food such as small plates, cheese plates, sandwiches and desserts.

The menu itself was evocative of an antique book, and made you feel as if you were choosing your poison straight out of one of Poe’s chilling classics. 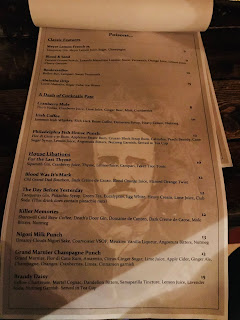 There were so many House Libations to choose from, it took me a few minutes to decide what I wanted - but eventually I ordered a “For the Last Thyme”, to start - which was a super yummy and refreshing gin cocktail made with lemon juice, Campari, Fever Tree tonic, cranberry juice, and a fresh sprig of thyme to top it off. 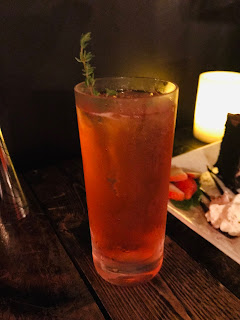 Our group got a piece of the Tuxedo Cake to split, and nosh on while we enjoyed our drinks.

I managed to cut the first slice and take the best piece with all the chocolate crumbs on it - which I definitely got called out for, but ate anyway. 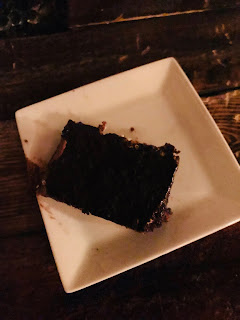 The cake was *super* delish - a very creamy and gourmet tasting with a yummy chocolate cake layered with vanilla bean cream cheese, a chocolate crumble crust, and a dollop of fresh whipped creme & strawberries on the side.

A really great deal for only $7. 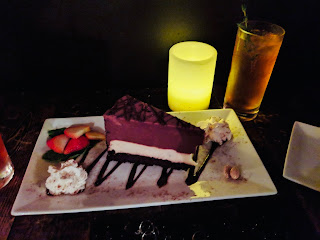 For a second drink I had the Boulevardier, which I almost set down in the small hole in the center of the table.

Luckily I was fore warned about the crevice, and did not. So, I got to enjoy the fancy concoction in its entirety - which was made with rye, Campari, and sweet vermouth. 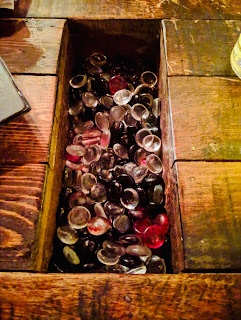 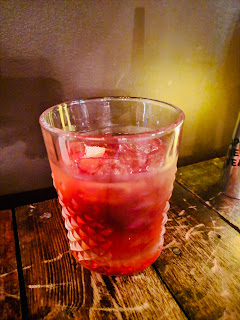 We all had an amazingly fun, Poe themed evening, ringing in the New Year at The Poe House and listening to my brother make  screeching, hissing cat noises - which definitely added to the ambiance.

The rest of us were tempted to make inhuman whaling noises while knocking and scratching on the wall - but also didn't want to spook our server prompting; him to call the police and forcing them into a "The Black Cat" reenactment; so behaved like normal adults that animal noises while out to dinner - and drank our cocktails.

Our only complaint was that there wasn’t any literature or plaques saying what years Edgar actually lived in the house.

But, they did have fun t-shirts for sale which kind of made up for that shortfall. 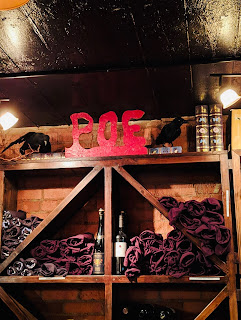 *no black cats (or humans) were harmed in the making of this blog
Labels: Hendersonville
Location: 105 1st Ave W, Hendersonville, NC 28792, USA