So, since I have no idea what’s ever going on in regular football - I decided to check out Puppy Bowl 2019 this weekend at the Kanuga Conferene center in Hendersonville.

That way my friends wouldn’t get annoyed with me when I showed up at their parties and started asking questions like “Why did that player get a penalty?”, “What does the score mean?”, “What year is it?”, “I think I’m lost in time and space?”, “What time do we eat?”, and so on. 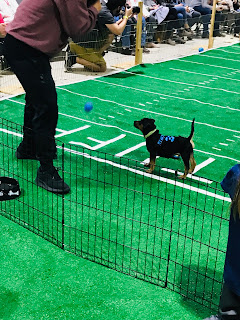 The Puppy Bowl was *legit* the cutest thing I’ve ever seen in my life (and, I’ve seen a lot in the nearly 2000 years that I’ve been haunting).

There were puppies, puppies, and more puppies - that were divided into two teams; the “Tuff” & the “Gruff” teams - with the puppy players wearing adorable little dog jerseys. 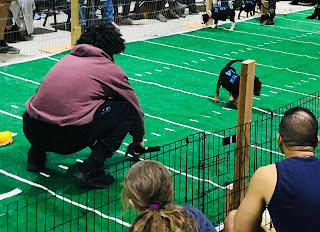 My first snack that I got to enjoy while watching the game was organic - vegan pretzel knots from Blunt Pretzels.

They were a super tasty snack, and spicy dipped in mustard.

Blunt Pretzels normally sets up shop over at New Belgium Brewing in Asheville - for future reference. 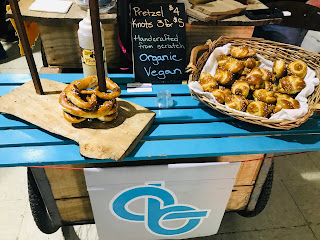 This adorable (and adoptable) dog from Brother Wolf definitely sniffed out my pretzels and gave me me those “give me a piece of your pretzel knot I’m cute” squinty eyes after his half time appearance.

He’s a super sweet wiry haired wonder that would make a great bestie to travel with on all your food trips. 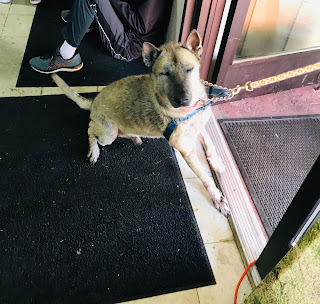 Rapper ‘Grey’ performed an ah-mazing half time show. I *loved* his music & his message.

If you haven’t heard him yet  - definitely check him out. 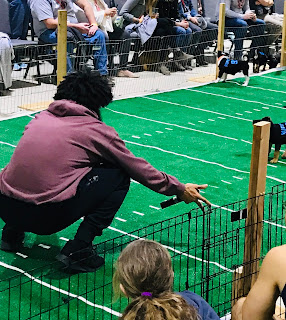 After half time, I headed over to the “No Evil Meats” booth for some Vegan Buffalo Chicken Wings with Dill Ranch. As soon as the wings came up; I completely devoured them - and totally forgot to take a picture. Oops.

Anyway - they were *so* delish, crunchy, spicy and super scrumptious.

I definitely had sauce dripping all over my face, down my pants, and even on my boots.

No evil foods vegan meats can be purchased in a bunch of grocery stores throughout WNC; including Ingles. 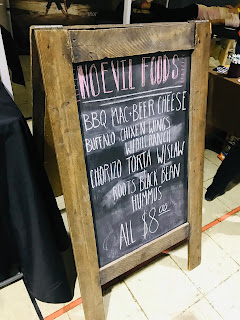 After I ate my nom nom vegan chicken wings I parused the booths that had super fun tote bags, leashes, and t-shirts that said cute things like “I like big mutts and I can not lie”; which also afforded me the opportunity to swoon over the puppies that the volunteers were carrying around while mumbling Sir Mix-A-Lot songs under my breath. 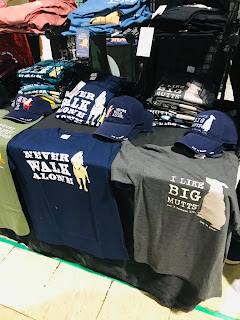 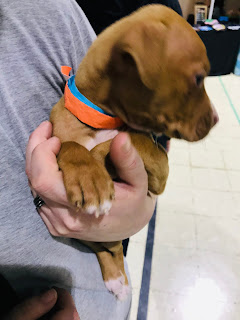 Lastly, before I headed home to see my big mutt - I grabbed a Cookies & Cream Hot Coco from Share Well Coffee, to go.

It was very creamy, delish, and perfect for the drive though the mountains back to my haunted mansion. 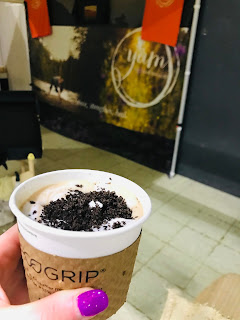 Remember - “adopt don’t shop!”. Well, I mean - you can shop; just not for dogs. I actually suggest you adopt a dog and then take them shopping.

This sweet gal up for adoption looks like she’s an expert shopper, and would be the perfect fur baby/shopping companion to take on outings to the Asheville Outlet Mall. 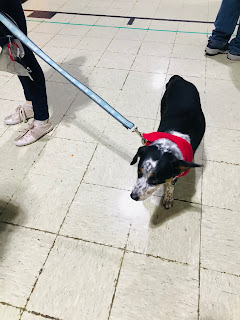