Asheville Brewing Company is a brewery & restaurant with several locations throughout Asheville. Their North Asheville spot has movies, a game room, and (gasp!) delivery.

All of their locations have beer, pizza and (vegan & non-vegan) burgers (yay!). 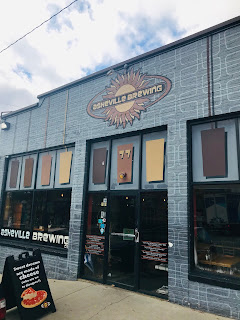 I decided to check out the downtown locale off Coxe Avenue, because I was in that general vicinity, had driven by there like a million times, always wanting to stop - and was very hungry. So, figured it was the perfect time.

There’s street parking on Coxe, as well as lots of pay lots in that area for around $2-3 (I suggest brining some cash so you don’t have to stand in the cold and call to pay for a spot). 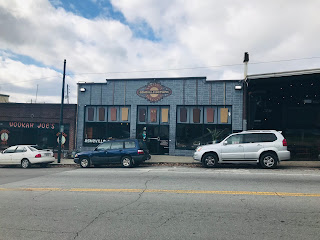 I parked over on Ravenscroft - which was nice because it was free.

Also, since I went around lunch time I could hear the church bells chiming from one of the nearby historic churches, as the light snow flakes began to fall... it was totally enchanting. A pleasant little walk to say the least!

There's both indoor and (pet friendly) outdoor seating at Asheville Brewing Downtown. I sat inside at the bar because it was starting to get pretty chilly before the impending storm, and I didn’t want to take up a large table all to myself and be “that ghost”. 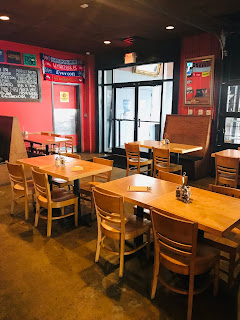 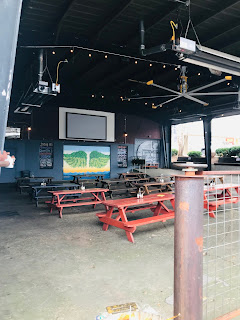 ABC has a pretty broad menu with lots of cheesy yummy looking stuff - including nachos, jalapeño poppers, and a zillion types of pizza.

They also have salads, sandwiches and such. 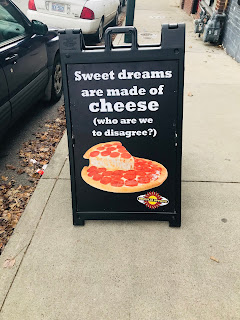 Although they had a very wide variety of beers on tap; including a seasonal/holiday “Christmas Jam” & “Ninjabread” that looked extremely delish. I had to drive - so had a sweet tea that came with a paper straw and slice of lemon. 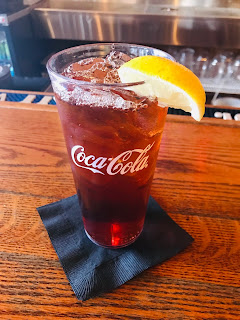 Fun fact; the menu that’s over the bar that lists all the beers, also includes the ABV’s. 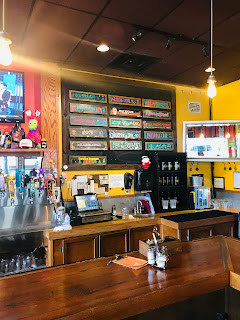 As tempting and scrumptious as the pizza and other things on the menu looked -
I was going to get the “Ghost Burger” because well - I’m a phantom and I thought that would be silly & ironic - but; I decided on the “Tombstone Burger” made from Hickory Nut Gap Farms meat because I was craving something with BBQ sauce.

The Tombstone Burger itself was super tasty, and way less boring than the 1993 classic film staring Val Kilmer and Kurt Russell.

The burger came with a plentiful amount of cheese, bbq sauce, bacon that had some spices added to it, and was topped with onion straws that made it kinda crunchy. The bun was majestically fresh - brioche like, nomz, and tasted delightfully homemade. 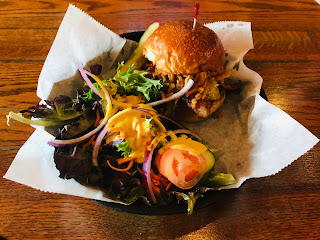 I subbed the fries that come with the burger for a salad instead, since I’ve been in healthy mode lately. The side salad had a fresh assortment of lettuce, carrots, onions, small tomatoes and cucumbers, with a delish honey mustard dressing - a perfect addition to the burger and great for lunch.

ABC has lots of merch for sale that you should definitely check out - including hats, t-shirts, beanies, sweatshirts, koozies, and pint glasses. They make for great gifts to send to out of town friends and family since a lot of them say “Asheville” on them! Right now they have a special where if you buy a $25 gift card you get a free ABC pint glass. 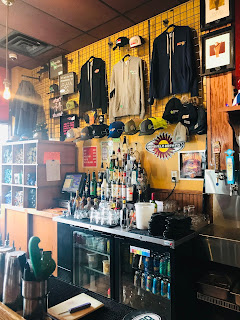 I think one of my fave parts of Asheville Brewing (besides all the mouthwatering food & beer) was the unicorn piñata that was wearing the festive Santa ear things. 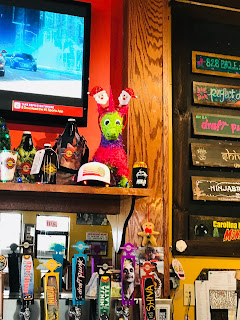 He definitely looked like he was quite content in his safe space... Far from a six year olds birthday party - where the parents teach impressionable youth kindness & respect towards all living creatures, by encouraging them to beat hordes of candy out of a lifeless paper mache animal with a metal baseball bat. 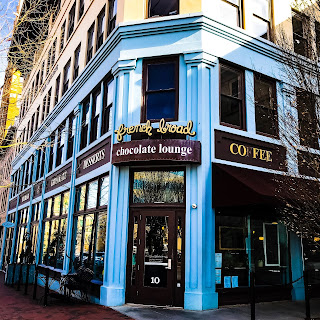