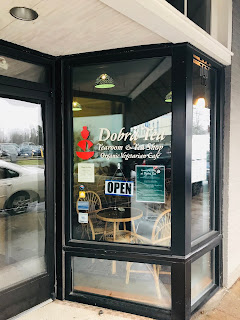 Street parking is right out front of the cafe. However, parking on Haywood can be kind of intimidating because it’s a busy little area - so I’d suggest just bringing some singles and parking in the pay by spot lot off Dunwell Ave., which is $2 an hour.

Enter through the main door, and then through the other door to the right with the Dobra Tea sign above it. Just go right in - you don’t have to knock or anything. 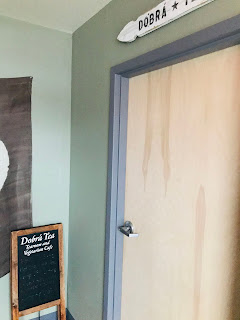 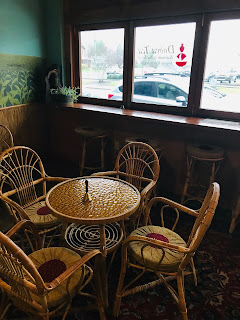 The laminated menu features all the yummy dishes and select drinks.

The (quite extensive) tea menu is listed in a book reminiscent of the book of spells that I used to plant in peoples houses that gave me dirty looks, that time I summered in Massachusetts in 1692. 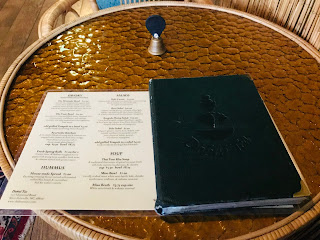 In the case by the register there’s a plethora of tasty looking vegan & non vegan, chocolate and non chocolate treats that are not listed on the menu - so I’d suggest checking that out as well, before you sit down to eat.

Truth be told - I wasn’t quite sure what the little bell on the table was for when I first sat down - but didn’t want to be *that* rude asshole that just started ringing it. Turns out that you ring it after they bring you your menus and you’re ready to order.

When I was finally ready to order, I definitely got ‘bell anxiety’. Thoughts of imminent fear raced through my head... “what would happen if I rang the bell and no one came? ...then I would have to ring it again and look like a huge dick. What if I had a defective bell, and it didn’t ring at all? What if I rang my bell but my server thought it was someone else’s bell - that would be awkward.”

Surprisingly, the server came over after one bell ring. 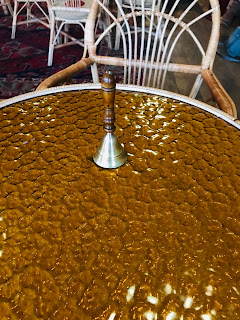 Soon after, I (unintentionally) rang the bell about five times when I was shifting my stuff around to take some pictures. This must happen all the time, since my server didn’t come running over. I’m assuming he saw me get real shifty eyed - or, just had a sixth sense for idiots.

The Cup of Ayurvedic Kitchatri - which I ordered to be made with coconut oil, came out in an adorable little bowl on top of a wooden square plate. (You can also get it prepared with house made ghee, instead). The kitchtari was topped with fresh cilantro and a lime that I squeezed and mixed in before eating. The meal was the perfect temperature and had a nice consistency. The flavor was spicy but not too spicy, and very hearty. It’s the type of dish where you just feel better after you eat. 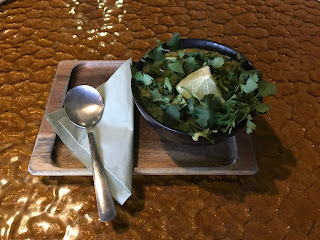 To drink I had an Iced Goji Okay Elixir - which is an infusion of turmeric, gogi berries, coconut butter, black pepper, and honey - & made locally by NOHM Elixirs of Asheville. You can have it made with cow milk or coconut milk. (I had the coconut milk.) The drink itself was very tumeric-ie and creamy, and (surprisingly) very refreshing. 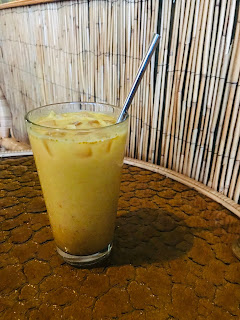 After you finish your meal;  pay up at the register. Also - the waitstaff will bus your table for you.

Dobra Tea West is a great place for an affordable and healthy lunch in a laid back, quiet atmosphere. It seems like a great place to go and get some work done too - in additional to the small groups of diners, there were several solo diners on their laptops. Bonus; the music was similar to soothing spa music, so it makes it even easier to focus and be productive,  or - space out and look at pictures of felt penguins on Etsy... whatever you’re into really.

After dining at Dobra Tea West - I thought the bell idea was so great; I decided to implement one at work. When I needed help on a project I was working on -  I just started ringing the little bell that I purchased for my desk, to indicate to my manager I needed some assistance. Sadly, it did not go over so well.
Labels: West Asheville
Location: 707 Haywood Rd, Asheville, NC 28806, USA