The Biltmore House is a historic castle in Asheville with lots of yummy restaurants and snacks. Kinda like Disney for adults, but much more historic (and no rides). 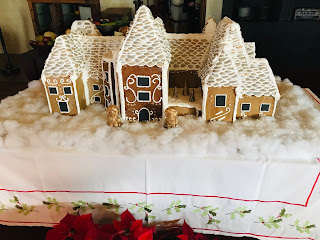 That’s not really the Biltmore. The entire building is *not* (I repeat, *not*) made out of gingerbread. That’s just a gingerbread replica scaled down for size.

Anyway - Christmas is my *absolute* favorite time of the year. I really wanted to get in the spirit (no pun intended), so decided to check out the “Christmas at Biltmore” celebration.

I purchased a ticket online and chose a time to be at the house (2pm), for my self guided tour. The week before I went; I made sure to do lots of preparation and downland their (pretty nifty) app - so I could get an idea of the places I wanted to check out, and where to eat, etc.

After you pick up your tix at the ticket house - you can park not too far by the Main House and take a short stroll over while checking out some of the neat statues like the ‘Goddess Diana’ one, who is a goddess of woodland creatures and the moon. Oddly enough - there were not hordes of wild animals hanging out in the gazebo where she stands when I took this picture. There are, however - lots of cute creatures to be seen on the short hike in. 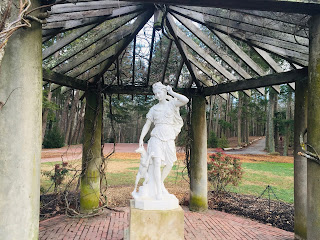 *pic of goddess from prior visit

You can also park at one of the remote lots and take the six minute trolley ride in. I was late - so I took the trolley this visit, which was nice - because the driver went over a good bit of history about the house itself and the Vanderbilt’s (the people that built the house).

As soon as the trolley dropped me off in front of the Main House, I took in the vast estate - used the restroom over in The Stables next to the home (albeit theirs 42 bathrooms in the home, they’re not in use), and proceeded for my (self guided) tour. Side note - there’s no horses in the stables anymore - but lots of fun shopping and places to eat. So - if you were thinking you could hang out in a pile of hay and enjoy your lunch in a out of a feeding trough next to Seabiscuit  - you’re out of luck.

Inside The Main House itself, there were *so* many Christmas decorations to take in, lots of trees, and a *ton* of porcelain dolls that reminded me of my own haunted doll collection that I keep up the attic.

There were porcelain dolls in miniature Holiday chairs. 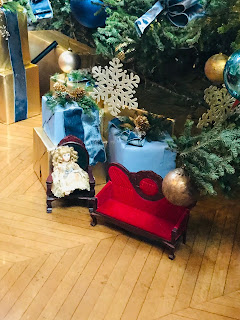 Porcelain dolls underneath the tree next to Nutcrackers. 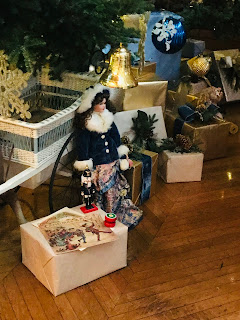 Larger dolls (that were not porcelain). 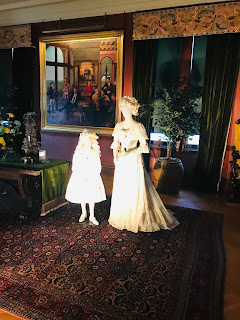 And; this (very rugged looking) porcelain figurine carrying a lamb on his back. 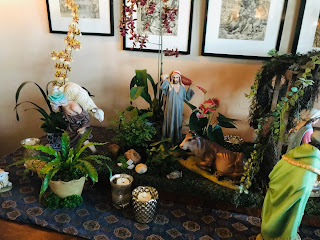 Overall there were lots of porcelain things.

There was also this (slightly annoyed looking) ghost lady that appeared in my picture of the dumbwaiter after I stopped to admire the (presumably porcelain) tea pot and capture the moment. 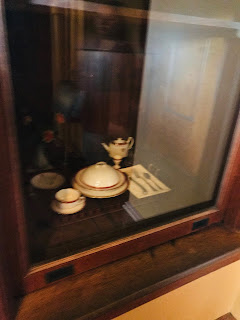 Now her soul will be forever trapped in my IPhone 7.

After my super fun tour of the Main Home - I headed back over to the adjacent (horse free), Stables to enjoy some dining and shopping.

At The Stable Cafe I had a nice lunch which consisted of a very refreshing Lemonade and an Angus Beef Hamburger made from cows raised on the Estate. 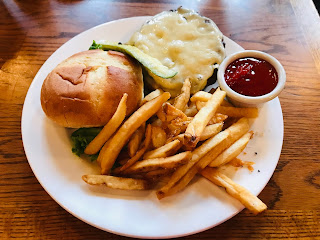 The cafe itself was decorated with lots of holidayish type stuff - and a nice place to enjoy a hearty lunch. 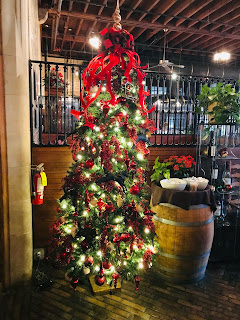 Make sure to check out their hours and menu on the Biltmore App.

Before I journeyed over to Antler Village (on the other side of the property) - I made sure to leave some extra time to peruse the shops in the stables such as the The Carriage House Shop and The Confectionary; which are great places to pick up some Christmas gifts and yummy chocolates. They have super cute things like (very adorable) Hedwig wine stoppers that would be the *perfect* gift for the Harry Potter enthusiast in your life. Don't forget to sample some of their holiday-esque Biltmore brand Wassail and pick up a bag or two for stocking stuffers. 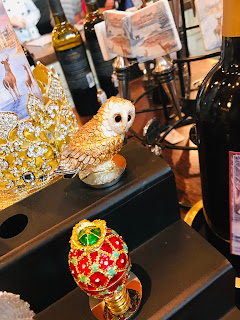 After my shopping excursion I re-boarded the trolly in front of the Main House to get a ride back to the lot where my vehicle was.

Unfortunately; I couldn’t find my car.

Fortunately; one of the nice gentleman working there must have seen me staring at my GPS while wandering in circles and offered to help; explaining that when the trolley drops you off - you’ll be on the opposite side as when they picked you up.

Once my vehicle was located, I headed off to the Antler Village; which was just a short (super scenic) two minute drive.

Antler Village is also decorated to the T for the Holidays, and sure to put you in a jolly-merry-joyful mood, with the abundance of beautiful lights, and Christmas music playing throughout the streets. 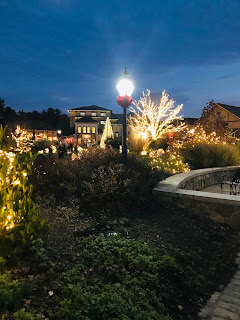 The Creamery is the perfect place to to have  some hot chocolate and a gingerbread man for dessert while you take in the sights. I purchased a (affordable at $8) Holiday Mug that said “Christmas at Biltmore” - which was a wonderful souvenir and perfect to wrap my hands around and keep them warm while I sat outside and enjoyed the ambiance and sunset. 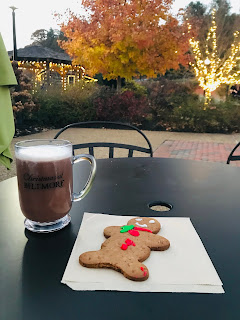 Before you leave Antler Village make sure you go “Fairy Spotting” at the enchanted Fairy Forest (it’s like Dog Spotting, but seasonal since fairies only come out during the summer and around Christmas). 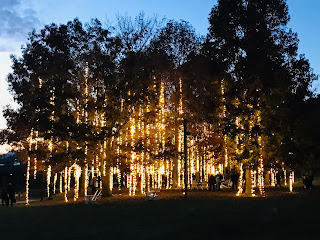 I suggest keeping a miniature iron horse-shoe in your handbag to ward off the evil fairies.

I had *such* a blast at the entire estate of the Biltmore, and would highly recommend their Christmas festivities to anyone young or old, phantom or non-phantom.