BimBeriBon is a healthy eatery off Haywood Road in West Asheville, not too far from the freeway - with vegan and gluten free options. 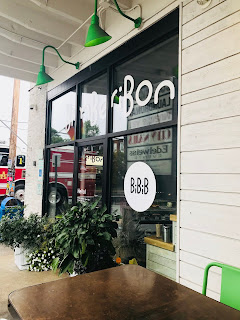 They had a cute little multicolored flag out front which (I assumed) meant they had kittens- they did not, in fact, have kittens, but I decided eat there anyway. 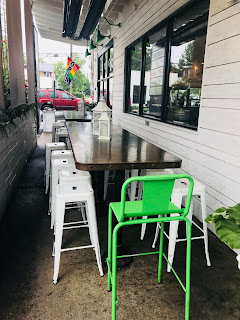 Parking is abundant in the lot adjacent to the restaurant, so there’s no need to worry about finding a spot or having to double park someone while you enjoy an extended lunch.

They're open for breakfast, lunch, and dinner. I went for lunch, but their breakfast menu looked super nomz too.  BimBerriBom not only has a plethora of pastries for sale, hot coffee, cold brew, and superfood lattes, they have a large variety of bowls, sandwiches, soups, salads, and... a ‘create your own plate’ option. 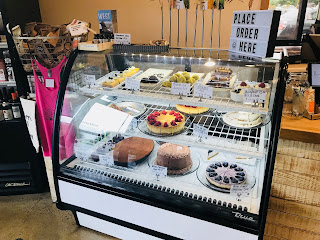 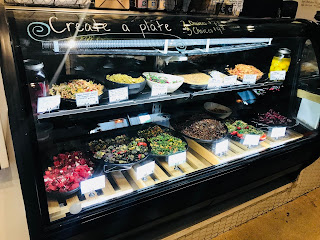 Pick up a menu, order at the counter, get a cute little place holder thing (mine was a pineapple!) and seat yourself. 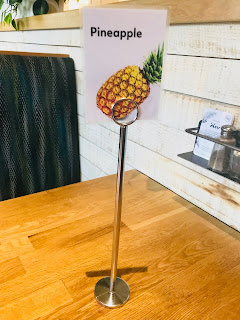 They have indoor and outdoor seating areas which are both equally enchanting. After I throughly confused the guy at the counter by mumbling through my order, I sat at a booth so I could enjoy the soft lighting and cute murals on the wall of fruit and veggies. 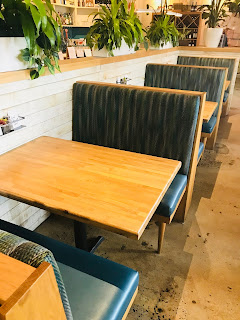 It's kind of interesting because online one of the features for BimBeriBon is “solo dining”, and there were like four other single people in there dining alone; so it was pretty cool.

I was tempted to go with a beef dish because meat at BimBeriBom is locally sourced from Hickory Nut Gap Farms, but ended up ordering a Shrimp Quinoa Paella Bowl with Asparagus, a Raspberry Hibiscus Soda to drink, and Vegan (nomz) Cheesecake for dessert.

My Raspberry Hibiscus Fizz Soda came first and was super fresh; not a sweet gross sugary soda- but more like a refreshing sparkling water with a ton of fresh raspberry pulp/purée, and a slight hibiscus flavor. It even came with an Earth friendly paper straw! 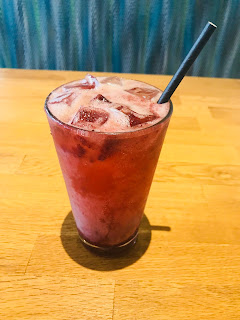 I wanted to take the straw home with me to reuse; but didn’t want to look like a strange old woman, so decided not to.

My Shrimp Quinoa Paella Bowl came in an adorable little bowl, and smelled delish when it was delivered to my table. It had a lovely presentation with fresh looking garnishments. It was super hot (you could see the steam coming off of it) and extremely flavorful. There was ample shrimp in the bowl; the shrimp themselves were (also) very flavorful with a rich buttery taste. Plus; the bowl was packed with asparagus, mushrooms, and other veggies that were cooked to perfection. 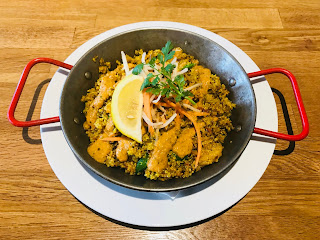 My Vegan blueberry cheesecake (that I got togo) was made with cashew milk. They’ve got a regular “New York” cheesecake too, but decided I would try that on my next trip. The vegan cheesecake tasted like an authentic yet healthy cheesecake with a nutty taste, it was topped with fresh berries and had a rich crust. 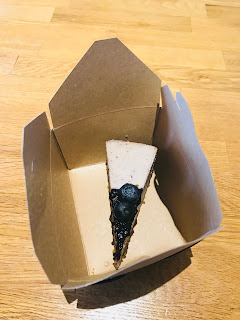 Since BimBeriBon is the perfect place for a solo date; I suggest getting dressed up and taking a uber over for dinner - they have a bar area with wine, cider, cocktails, as well as non alcoholic options. And hey; even if you’re not drinking, it’s always nice to take an uber *anyway* so you have a captive audience to tell all of your traumatic childhood experiences to. 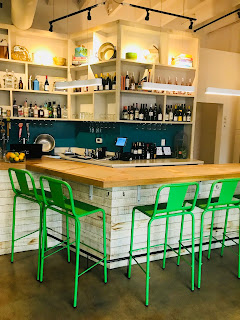 Check out BimBeriBon on IG